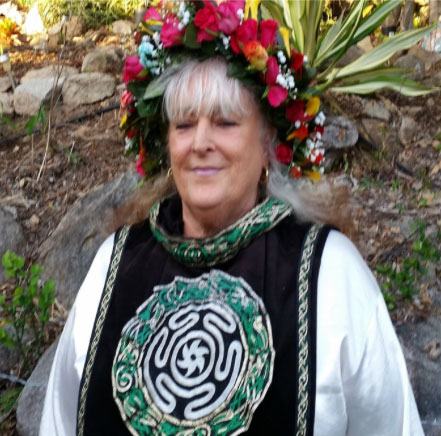 Tamara Von Forslun, dubbed by Raymond Buckland “The Witch of Oz”, in the early 80’s, has been involved in Traditional Witchcraft & Wicca for over 5 decades as an Initiated student Witch and a High Prirestess teacher since the 70’s. She is considered one of the world’s respected Wiccan & Witch Elders and is the Founder and Creator of Australia’s first legal Neo-Pagan Church “The Church of Wicca” (1989), was an Ordained Arch Priestess of the “Aquarian Tabernacle Church Australia” (1991). Oracle High Priestess Elder of “Clan of Boskednan, International” (1978), Ordained High Priestess of the “Fellowship of Isis” by Lady Olivia & Lord Lawrence Durdan-Robertson, and later been accepted as Elder of the “Grey Council of Wizards & Sages” (2019) by Oberon Zell. Tamara is an International author, lecturer, teacher, ritualist, Wiccan Marriage & Funeral Celebrant, & Traditional Witchcraft Ritualist.

Over 50 years Tamara has taught and trained thousands of Seekers, and Initiated hundreds of Initiates as Witches under the banner of the Clan of Boskednan and the Church of Wicca. She has also Ordained hundreds into the Priesthood and has Ordained 48 High Priests and High Priestesses who now run their own Covens/Clans. Tamara is now offering the opportunity to train under her through social media and learn through her long path of teachings. This Seeker Course has over 50 Lessons which are in Theory and Practise, afterwhich Tamara is offering a more Advanced Teaching in Traditional Witchcraft & Wicca to advance through the degree’s from Witch to Priesthood, to help spread the words of the Great Divine Feminine and the powerful Divine Masculine.

This course will bring you closer to your own Path and Truth, that hopefully will be awakened and realised by the end of the Course. This indepth course offers manuscript lessons and also Vlog’s of Tamara explaining the myriad details behind each course. It will also give you a membership into a large community under the banner of the Clan of Boskednan International. If you wish to use her writings as a local training course for your own small Clan/Coven, this is allowed after the full course training has been completed. The Modules (blog & vlog) of the course are as follows:

20. The Witches Handfasting Ceremony
21. The Sacred Book of Shadows – The Witches Handbook
22. The Magic Circle-Temple of the Witches
23. The Witches Pyramid-Temple of the Priesthood
24. Magic of the Astral Plane & Astral Travel
25. Natures Secrets-Herbalism & its Magic
26. The Inquisition & The Burning Times
27. Pagan Elders of the World-Past and Present
28. Reincarnation & Pagan Karma
29. Module 3 Questionnaire

30. The Witch Tools of Traditional Witchcraft & Wicca
31. Matriarchy v Patriarchy
32. The Witch Home Blessing Ceremony
33. The Witches Yearly Calendar in Full
34. The Goddess Through the Zodiac & Astrology
35. Blessings of the Cakes & Wine for Sabbats
36. The Buckland Museum of Witchcraft & Magic
37. Module 4 Questionnaire

38. The Road Begins
39. Properly Prepared I Must Always Be
40. Preparing The Sacred Space
41. Creating the Sacred Space & The Magic Circle
42. The Wiccaning & The Crafting Ceremonies
43. Initiation of a Witch & Beyond
44. Ordination into the Pagan Priesthood of Boskednan & High Priesthood
45. Death-The Final Rite of Passage
46. Module 5 Questionnaire

47. Luna Consciousness 7 Drawing Down of the Moon
48. The World of Shamanism v Witchcraft
49. Spellcraft-Spells & Rituals
50. Boskednan-Seek and Ye Shall Find
51. Boskednan-Enter Thou Thy Temple vlog
52. Completion Certificate & Awards

During this entire course Tamara is available with contact through her personal email address, giving Seekers a One on One connection. If you have a group of interested Seekers who wish to do this as a small Clan or Coven then that can also be arranged as we are social creatures and the concept of having a good working group adds to the growth and strength of Paganism throughout the world.

If you are interested in doing this very indepth course please connect via Tamara’s website; https:tamaravonforslun.com for costs and more specific details. Hope to hear from you soon and enjoy the journey together along the path of Tarditional Witchcraft & Modern Wicca through the ancient path of the Clan of Boskednan International.